The Cemeteries of Old San Antonio 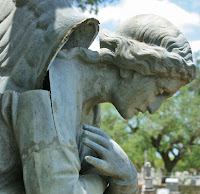 About a half mile east of the Alamo (downtown San Antonio, Texas), is a grid of old cemeteries. These are the cemeteries of Old San Antonio. The cemeteries of NEW San Antonio are on the south side of the city, traditional Victorian ones – angels, mausoleums, and so forth.
The City Cemeteries were the first public cemeteries in San Antonio  −  City Cemetery No. 1 was established in 1853, and the Alamo Masonic Cemetery next to it a year later. You really won’t find many tombstones dated before 1853, as Texas was only annexed to the United States in 1845. There was an old original cemetery on the west side, but that filled up by 1853 and was subsequently turned into a park. The grid of cemeteries takes up roughly the size of seven city blocks, sitting there under the scorching Texas sun.
As I sat in my air-conditioned rental car last summer watching the police cruiser parked under the pecan and palmetto trees, I wondered if one of us was parked on top of the buried Ferrari that I’d read about. In 1977, the beautiful oil heiress Sandra Ilene West was buried here (Alamo Masonic Cemetery) in her best lace nightgown, behind the wheel of her powder-blue 1964 Ferrari 330. Her tombstone is basic, nothing to indicate the extravagance below (Read more via links at end).

I got out of the car and meandered about the weird orange-lichen-covered stones, but felt uncomfortable poking around near the cruiser with my camera. Also, I could see why he was parked under the trees – it was 100 degrees in the shade and there wasn’t much shade. The ground was parched and cracked, with only tufts of grass growing out in the direct sun. I never found Sandra West’s grave marker.

I drove over and asked him how it was going. It’s not unusual to see cops or U.S. Mail carriers taking a break in a cemetery, but I was kind of surprised by this fellow’s reply. He said the police now guard the old cemeteries because thieves drive in with stolen cars, strip them, and leave. Being from back east, it’s kind of difficult to imagine crime in the desert.

The Old San Antonio City Cemetery area is a 103-acre complex made up of – I kid you not – 31 individual cemeteries! In my Cemetery Travels, I’ve found that it’s not unusual to find that one cemetery is actually two that merged, or that due to a cemetery being moved, one cemetery has accepted all the graves of another cemetery. However, it appears as though San Antonio just decided that whenever someone wanted to start a new cemetery, it would be here. However, after about 1900, local residents resisted further expansion into the area. 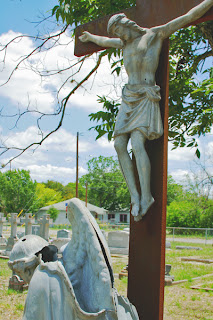 It is a fascinating place, this cemetery zone, and I wished I wasn’t on my way to the airport so I could spend more time. Being a hardcore Cemetery Traveler, there was a certain familiarity to the place, but some of the architecture, the landscape, and memorials were quite  foreign to me - the ornate iron crosses of Polish immigrants, the seashell-and-mortar graves, the Buffalo Soldiers in the U.S. National Cemetery. I found the broken zinc angel and crucified zinc Jesus in St. Michael’s Cemetery to be rather odd, especially with bullet holes in them. Kind of fitting, as this cemetery complex is built on Powder House Hill, the site of an old Spanish gun powder mill.
There are a few mausoleums here and there, but most of the headstones and monuments are rather modest. There are occasional exceptions, such as the grave of Mount Rushmore sculptor Lincoln Borglum in City Cemetery No. 1 and this (Winn Family) marble statue of the woman with children at the entrance to City Cemetery #6. It was created by the Italian sculptor Pompeo Coppini, whose most famous work is the cenotaph to the Alamo Heroes in front of the Alamo (battle fought between Texas Revolutionaries and General Santa Ana’s Spanish Army on March 6, 1836).
I have to say, though, the most interesting thing about these San Antonio cemeteries was Sandra West's nose-thumbing at the saying, "You can't take it with you." She loved her Ferrari so much that she wanted to be buried in it. But did she really get her last wish? Check out this link to an interview with Sandra West’s nephew. According to him, she was not buried in her favorite Ferrari! That one was too valuable so her brother-in-law (her late husband's brother) substituted one of their lesser-valued ones to be her final resting place! (Read more here.)
Further Reading and References:
City Cemetery No. 1 Park Tour
San Antonio City Cemeteries Historic District, Old - San Antonio, Texas (Waymarking.com)
San Antonio Parks and Recreation – Old San Antonio Cemeteries
Woman Buried in Ferrari
More Buried Ferraris
Historic East Side Cemeteries Restored
StoneAngels: The Cemetery Traveler at 1:49 PM